The project brought new life to an underused central public park along the Dalsland Canal, while preserving its charms. The team carefully protected the site’s ecological features: quaking aspen and birch, hillsides of wild flowers, and a lush water’s edge.

More than 5.6 million people have fled Syria since 2011, and Sweden has accepted the second highest number of Syrian refugees in Europe. This is only the most recent story in Sweden’s history of welcoming refugees.

Dals Långed has experienced both recent emigration and immigration and is home and lodge to different groups of people—established residents, new residents, students, and tourists—who often wish to connect in the small town, but sometimes struggle to do so. 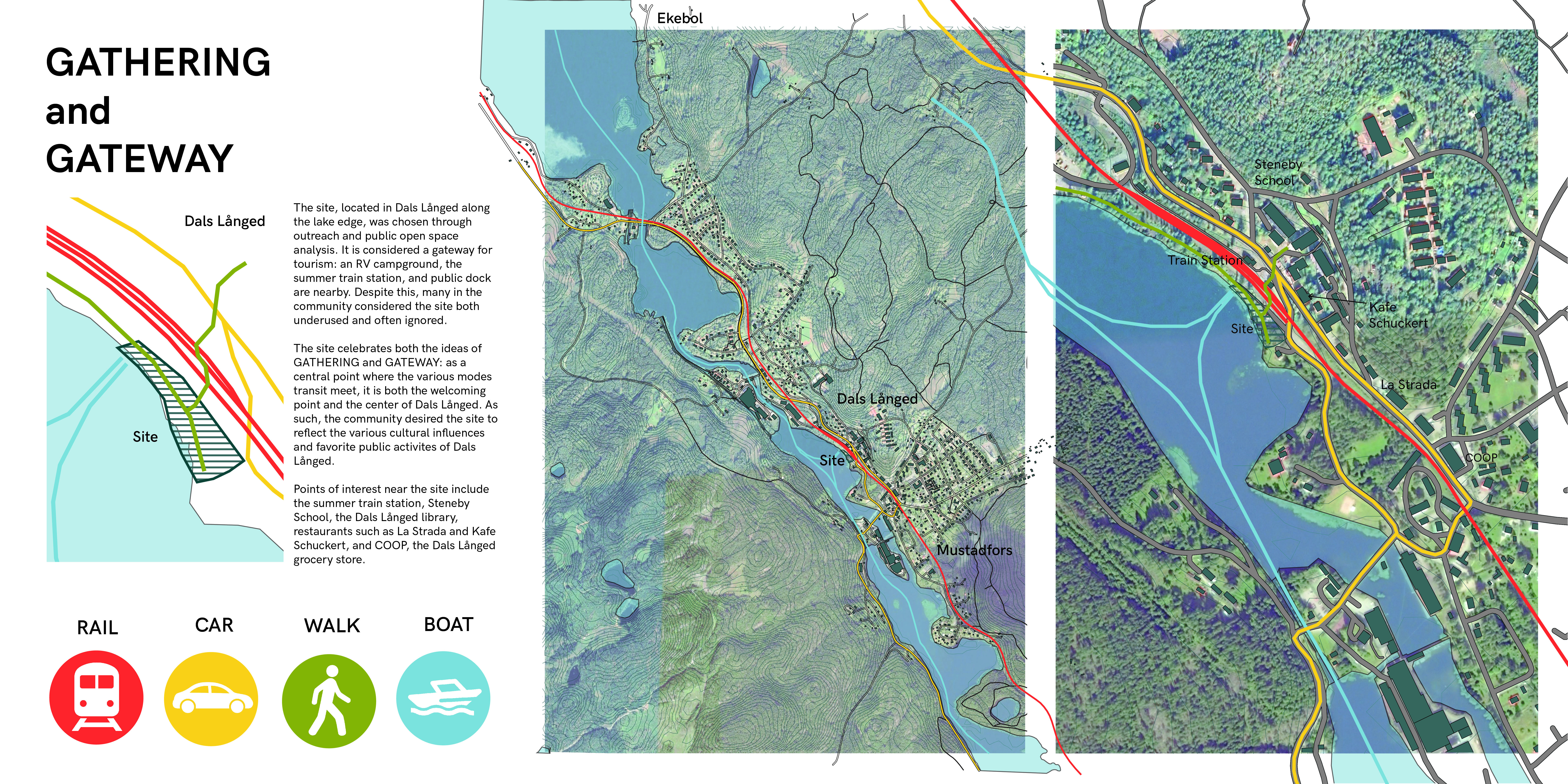 The site was chosen through outreach and public open space analysis. It is considered a gateway for tourism: an RV campground and public dock are nearby. Despite this, many in the community considered the site both underused and often ignored.

AN ENGAGED AND ITERATIVE PROCESS

Community engagement and relationship-building was critical during the design process for both years of the project. The second year of the project allowed students to respond to community members and amend and add to the previous year’s construction.

The design and decision-making process focused on engaging with community members, including established residents, new residents, and children. Over multiple sessions using different tools for engagement, students were able to discern the most critical and common needs for the site. 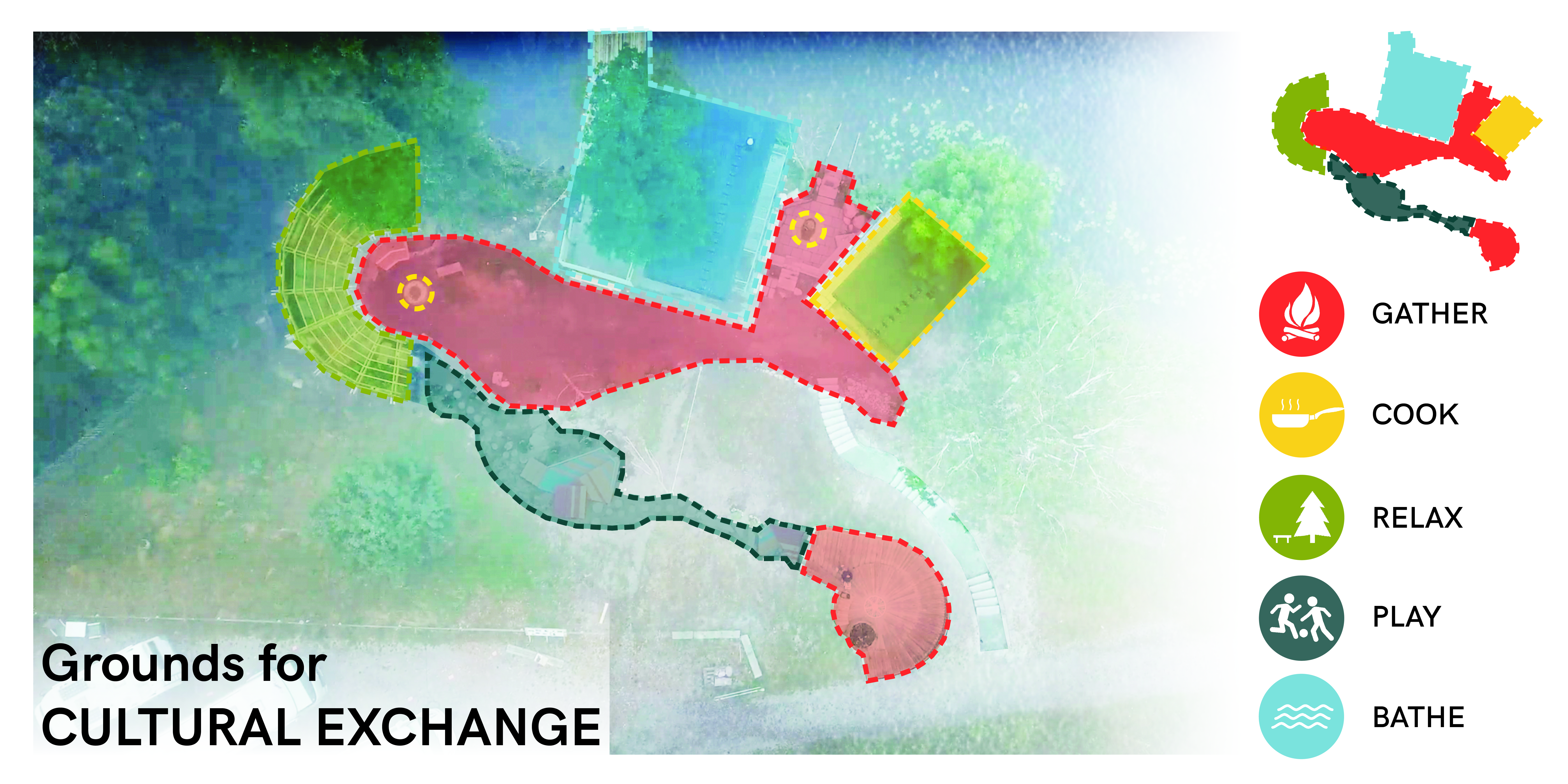 The activated park design provides space for gathering and relaxation, in addition to the primary program elements of bathing, playing, and cooking.

Students used primarily analog tools, drawings and models, to share ideas. This was critical to creating a vision to which community members could respond. The students also worked with children to build their own models of ideas for the park.

Dals Långed’s various communities continually observed and participated in the construction. For many students, it was their first time building, making the construction a learning process for the students and community alike.

For students, the project was an invaluable experience in integrating unique individual perspectives and disciplinary backgrounds, cultivating long-term trust, and building relationships with a community. This challenged accepted ways of thinking, inspired personal reflection, and yielded more innovative design proposals.

The final built park aims to be sensitive to existing ecology, culturally relevant, and welcoming to all community members and visitors to Dals Långed.

The site has already enjoyed winter and spring visitors. Residents are optimistic that summer festivals will be an especially active time of sharing space, socializing, and exchanging food and recipes while children play.

This project’s efforts engaged the community’s existing social infrastructure, including Dals Långeds Utvecklingsråd (the local community development organization), and worked to be a welcoming and open process.

In the wake of the war and humanitarian crisis in Syria, many Syrian refugees have made their homes in Sweden, which has an open-door immigration policy. Dals Långed, a rural village in southwestern Sweden, gains a new park that aims to foster social and cultural exchange between locals and their new neighbors. Featuring amenities such as a sauna, a kitchen, and a play space for children, Långed Park incorporates community feedback and local vernacular in a welcoming space that nurtures co-ownership by groups who bring their diverse backgrounds to this common ground.

In the rural Swedish town of Dals Långed, an international and interdisciplinary group of students from universities in the U.S. and a local craft school collaborated with Syrian newcomers, established local residents, and children to reimagine an underused central public park along the Dalsland Canal. Together, they designed and built a space to cultivate new and diverse social networks amidst ongoing social migration and dislocation.

The two-year project included iterative design in tandem with community feedback sessions. In full, the project introduced play, gathering, contemplation, outdoor cooking, and a sauna to the waterfront. Following phase one, many Syrian residents found the park beautiful, but felt it was not for them. The children’s playscape was integrated into the second phase of the project because children can motivate cultural exchange. This demonstrates the importance of a phased design approach: it allowed for the community to shape the place as they began to use it. Långed Park is a working example of public space informed and produced by the people it serves.

As part of a community redevelopment process in Dals Långed, Sweden, a design-build learning model was employed to reimagine how a central public park can foster a communal sense of place amidst ongoing social migration and dislocation.

Dals Långed is a rural village in southwestern Sweden. The Dalsland Canal defines the village, initially through industry and water transport and now through tourism and recreation. Urban migration and the closing of industry have put social and economic pressure on the region. However, the trend of depopulation has started to blur with growing Syrian and other immigrant communities settling in Sweden’s rural areas.

More than 5.6 million people have fled Syria since 2011 due to the war (UNHCR). Sweden has accepted the second highest number of Syrian refugees in Europe. This open door policy is laudable, yet Syrian newcomers face a host of political, social, and economic complexities, often manifest in various forms of discrimination while isolated in rural areas due to urban housing shortages. Still, there are profound stories of resilience and fortitude within this context of trauma and alienation.

A continuing evaluation of our project found shared aspirations among Syrian newcomers in the cultivation of new, diverse social networks and the importance of safe places to learn the Swedish language and meet non-Syrian friends. Both are requisites for integration and cultivation of a “home”, but remain entangled in social, cultural, and economic challenges. This impact of human movement is both unique to Dals Långed and part of a growing global narrative resulting in increasing rates of displacement and urban migration. There is a great need for novel public spaces and inclusive processes to cultivate them.

Interviews with Syrian newcomers and established local residents, focus groups with elementary school students on the site, vernacular craft demonstrations with local artisans, research presentations at a local craft school, formal county-wide community meetings, and an open drop-in studio format informed this two-year working relationship that builds upon the diverse stories of Dals Långed to reimagine the town’s centrally located ”village green”. The site, chosen through a preliminary community outreach process and public open space analysis, sits between the Dalsland Canal and the historic rail station. Prior to the intervention, its notable and ecological features included established quaking aspen and birch, hillsides of wild flowers, a habitat-rich wetland edge planting, and spectacular views of the canal and lake. These were carefully preserved and incorporated into the site master plan and constructed interventions. It was and remains a gateway conduit for tourism in Dals Langed. The public dock connects recreational boaters visiting the region to the town, and an RV campground offers accommodation to regional visitors. Prior to our involvement, everyday activities were infrequent and the site was considered underused and often ignored by many in the community.

An initial master plan explored how multicultural activities, social gathering, and intergenerational play could accommodate and nurture the future and evolving contexts within Dals Långed. An important consideration was how the site could be reactivated while preserving and enhancing sensitive ecological assets. Following the required setbacks, the structures were built on post/pier footings to minimize excavation, water access was achieved using floating rafts, and denuded areas were revegetated.

The project’s first phase highlighted the site’s cultural and ecological connection to water. The three principal program elements were a bastu (traditional Swedish sauna), a kitchen pavilion, and a cooking hearth/gathering garden situated between the two structures. The sauna is a historic public space typology presenting an environment of vulnerability and equity. The act of bathing together offers a culturally significant way to cross barriers between people. It also functioned as a topic of dialogue around cultural connotations of gender and nudity amongst the ethnic Swedes and Syrian community. As a winter activity, when people primarily shelter within their homes, the sauna activates the park as a community outlet for social interchange and friendship. The food pavilion and cooking hearth build upon a successful precursor: a temporary community kitchen fostering cultural exchange of food, recipes, and language.

The project’s second phase was an invaluable opportunity to reassess community goals and amend issues that had arisen since the prior summer’s intervention. Many Syrians noted that they felt the park was really beautiful, but that it was for others, not for them. The goal of long-term investment in the project is that overtime, a sense of co-ownership will evolve and take root. As a catalyst, the second phase explored incorporating play, learning and contemplation. The program became an adventure playscape that weaves between extensive plantings of native food species, including fruit trees, berry bushes, and vines. The idea was enthusiastically endorsed by all segments of the community, and anecdotal results document that children are impressive motivators for cultural interchange. Initial review has demonstrated that children's use of the playscape has encouraged families to come and use the park’s various program elements: cooking, eating, quiet contemplation, and swimming. Summer experiences the highest volume of users; this upcoming season will provide valuable insights about the extent of co-ownership. The community is optimistic that the summer’s festivals will be a time of sharing space, socializing, and exchanging food and recipes while children play amongst the edible garden.

Each year’s team was structured around a collaboration among students from various universities in the U.S. and the local Swedish design and craft school. As an international collective of students, we integrated unique personal perspectives in addition to an array of disciplines including landscape architecture, architecture, urban design, and wood and metal craft. Throughout the design and construction process, Dals Långed’s various communities continually participated and volunteered in the building. The interdisciplinary nature of the project presented challenges in management, communication, and consensus. Deep partnerships were formed with Dals Långeds Utvecklingsråd, the local community development group that proposed the project and invited the team to come, and with Bengtsfors Kommun, who had jurisdictional responsibility for the site and with whom we collaborated very closely to ensure it could be completed given the tight timelines required.

For students, the project was an invaluable experience in cultivating long-term trust, building relationships with a community, and continually evaluating our effects over time. It highlights the immense impact simple design decisions can have on the success of a project. Initially we provided shared access to the lake through a courtyard garden between the sauna and cooking pavilion. However, the sauna is traditionally done nude, and sauna users would access the lake while Syrian families were cooking in the courtyard, resulting in uneasiness and discomfort for all parties involved. This clear oversight was addressed in the second phase. We created a screened circulation path accessing the lake behind the sauna. A phased design approach enabled cohorts of students to learn from each other and address past decisions as more feedback was gathered. More importantly, it allowed the community to shape the place as they began to use it. We continue to see this, as they bring their own furniture and rearrange it to meet their needs.

Using public community design to address complex issues of rural depopulation, displacement, and community integration will require iteration and change over time. Investing in the park became an emotionally engaging process that inspires hope and excitement about sharing a sense of place. Research is being conducted to assess the effectiveness of this project to meet its goal: transforming an underused waterfront site in a small Swedish town into an active gathering space serving and bringing together new residents, established residents, and tourists. Academics from several Swedish universities are conducting surveys and interviews throughout the community. Results should be available by summer 2020.